RIGHT NOW I’M AT COMPLETE FUCKING FRUSTRATION POINT… THE ART, THE PASSION, THE PURPOSE, THEY MUST COME FIRST! 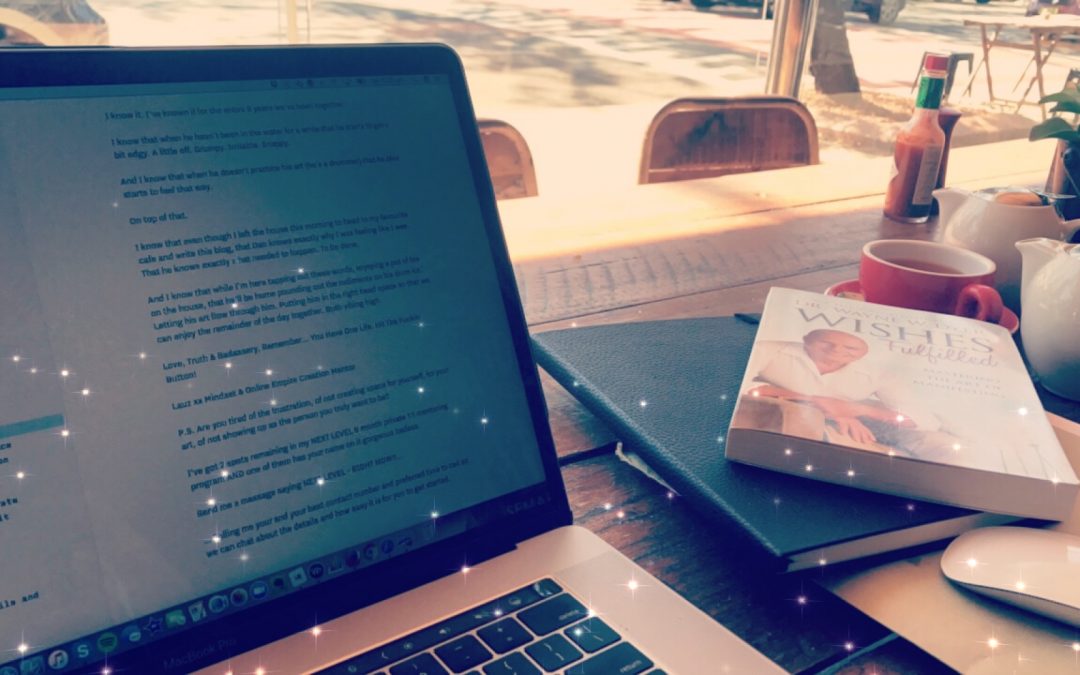 As I sit here and write things start to feel better.
Everything is starting to work out as I want it to.
Things are beginning to fall into their proper place.

I got out of bed a little later than I’d have liked to this morning. Apparently that wasn’t the best way for me to start my day.

Within minutes I was feeling highly irritated. At everything. Including the poor fucking birds singing their songs, hailing in the new day, the morning in the bottle brushes in the front yard.

Being that it’s Saturday morning, as with almost every other Saturday, Dan and I were heading to the beach. And, as we were getting ready I said to him that I really didn’t want to fucking go.

The shitty thing about that is that at that point I made the unconscious decision that I was going to have a shit time, that I wasn’t going to enjoy it, that it was going to be beyond ordinary.

And you know that the Universe gives you exactly what you ask for, right. Whether you actually, really, fucking truly want it or not.

The pages of my journal were getting blown around and full of beach sand, which, not that I probably need to tell you, makes writing near on impossible.

Which really pisses me off because journaling has become such an imperative part of my morning routine. It’s become as important, as significant… As fucking critical as breathing.

I know that journaling does so many things for me, namely clearing the irrelevant clutter from my mind and giving me a place where I can simply let an unconscious stream of words flow from my mind to my fingertips. Clearing out any clutter, concerns, negative thinking…. bullshit… from my brain.

Which them makes choosing the mood, attitude and experiences I’ll have throughout the day soooooo much easier.

The wind and sand were doing my head in. Or should I say that I was letting my ego mind rule my decisions and actions and giving it full permission to dictate that my mood, attitude and behaviour will get worse and worse. Thus creating a morning filled with shitty experiences.

I put the journal away and pulled out my book, Wishes Fulfilled: Mastering The Art Of Manifesting by Dr Wayne W. Dyer.

And in true style, the Big U whipped up a massive gust of wind and filled the pages with sand.

Some might call it giving up, but there’s a significant difference.

Giving up is quitting.
Surrendering is accepting the ISness of what is.

For the next hour and a half I lay topless in the sunshine while Dan did his best to catch a few waves in the wind whipped froth that was the mornings waves.

I tried tuning out to music.
I tried meditating.
I tried visualisation.

But as the wind got stronger so did my shitty mood.

So I returned to the van to wait for Dan.

5 minutes later he was there and my mood was clearly palpable because he decided not to even speak to me 😝 (Gotta love it when your man get’s you!!).

The drive home was virtually silent and appeared to take forever. Even though it was only 15 minutes.

And when we got home the dramatics continued…

I dropped most things I picked up.
I burned breakfast.
I dropped my fried eggs onto the fucking floor.

A TRUE COMEDY OF ERRORS I TELL YA!

And don’t get me wrong.

I really did want to have a good day.
But I also knew what was causing all this stuff.

I’ve been up and at ’em for hours, fucking hours and haven’t done a single part of my morning routing.

No pot of tea.
No journaling.
No reading.
No writing.

I KNEW EXACTLY WHAT I NEEDED TO DO

So I headed to the office and packed my backpack with the non-negotiable essentials.

And right now, as I sit here writing my unfiltered truth, surprisingly, but not at all surprisingly in truth, I feel so much fucking better.

Seriously though, that’s one area where I am truly blessed.

I know that he knows how absofuckinglutely important my morning routine is to me. How important… nay… how critical my writing is to me and my peace of mind.

He knows that when I don’t get the opportunity to express myself through my art that my day simply doesn’t go as smoothly as I would have it do.

He knows that when I don’t allow myself the space to write and to create that it impacts on all areas of my business and my life… And not in a positive way.

He knows that when I don’t make time or give myself the space to live my passion and my purpose that I am not the woman we both want and need me to be.

He gets it.
He gets it all.
Completely.

And for that I am supremely grateful.

Because, you see, the reason we always hit the beach first thing in the morning at the weekends is that for him, for Dan, being in the surf is the place and the time when he gets to do his morning routine… Being in the surf brings with it a certain meditative calm for him.

I know it.
I’ve known if for the entire 9 years we’ve been together.

I know that when he hasn’t been in the water for a while that he starts to get a bit edgy. A little off. Grumpy. Irritable. Snappy.

And I know that when he doesn’t practice his art (he’s a drummer) that he also starts to feel that way.

On top of that.

I know that even though I left the house this morning to head to my favourite cafe and write this blog, that Dan knows exactly why I was feeling like I was. That he knows exactly what needed to happen. To be done.

And I know that while I’m here tapping out these words, enjoying a pot of tea on the house, that he’ll be home pounding out the rudiments on his drum kit. Letting his art flow through him. Putting him in the right head space so that we can enjoy the remainder of the day together. Both vibing high.

P.S. Are you tired of the frustration, of not creating space for yourself, for your art, of not showing up as the person you truly want to be, of not allowing your passion and purpose to come first?

I’ve got 2 spots remaining in my NEXT LEVEL 6 month private 1:1 mentoring program AND one of them has your name on it gorgeous badass.

Send me a message saying NEXT LEVEL – RIGHT NOW!!…

… Telling me your and your best contact number and preferred time to call so we can chat about the details and how easy it is for you to get started.